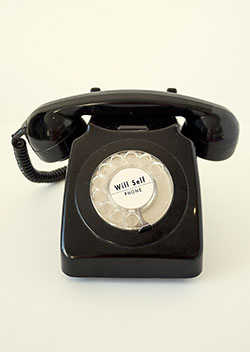 You can pre-order Phone at Amazon.co.uk

For the four characters at the heart of Will Self’s brilliantly acute novel of our times the five hundred-quid worry bead in their pocket may be both a blessing and a curse. For elderly Dr Zachary Busner it is a mysterious object – ‘NO CALLER ID – How should this be interpreted? Is it that the caller is devoid of an identity due to some psychological or physical trauma?’ – but also it’s his life line to his autistic grandson Ben, whose own connection with technology is, in turn, a vital one.

For Jonathan De’Ath , aka ‘the Butcher’, MI6 agent, the phone may reveal his best kept secret of all: that Colonel Gawain Thomas, husband, father, and highly-trained tank commander – is Jonathan ‘s long time lover.

And when technology, love and violence finally converge in the wreckage of postwar Iraq, the Colonel and the Spy’s dalliance will determine the destiny of nations.

Uniting our most urgent contemporary concerns: from the ubiquitous mobile phone to a family in chaos; from the horror of modern war, to the end of privacy, Phone is Will Self’s most important and compelling novel to date.