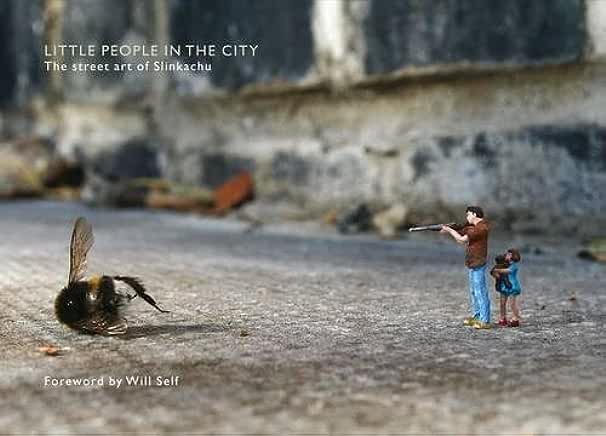 Little People In The City
– Slinkachu

See all books by Slinkachu at
Amazon.co.uk | Amazon.com

Will has written the foreword to Little People In The City: The Street Art Of Slinkachu – read on for more info.

Synopsis:
‘They’re Not Pets, Susan,’ says a stern father who has just shot a bumblebee, its wings sparkling in the evening sunlight; a lone office worker, less than an inch high, looks out over the river in his lunch break, ‘Dreaming of Packing it all In’; and a tiny couple share a ‘Last Kiss’ against the soft neon lights of the city at midnight. Mixing sharp humour with a delicious edge of melancholy, “Little People in the City” brings together the collected photographs of Slinkachu, a street-artist who for several years has been leaving little hand-painted people in the bustling city to fend for themselves, waiting to be discovered…’ Oddly enough, even when you know they are just hand-painted figurines, you can’t help but feel that their plights convey something of our own fears about being lost and vulnerable in a big, bad city.’ – “The Times”.