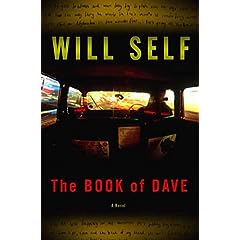 The Book Of Dave will be published in the USA on November 28th by Bloomsbury USA. It’s available for pre-order at Amazon.com.

From Publishers Weekly
[Starred Review] Self, the provocative British raconteur who used the Tibetan Book of the Dead to map London (How the Dead Live, 2000) is taking another literary shot across his home city’s bow. In his gleaming new puzzlebook, Self creates a dystopian future London, ruled by a cynosure of priests, lawyers and the monarchy. He invents Arpee, the musical language they speak that is based on a sacred text, The Book of Dave, which also serves, satirically, as the society’s moral and legal foundation. And who is this deity named Dave? An embittered London cabbie from the distant past – the year 2000. As the book opens, the kingdom of Ingerland is ruled by the elite and ruthless PCO. (Self is riffing on the Public Carriage Office, London’s transit authority.) People live according to The Book of Dave, which was recovered after a great flood wiped out London in the MadeinChina era. Flashing back more than 500 years, cabbie Dave Rudman types out his idiosyncratic, misogynist, bile-tinged fantasies while in a fit of antidepressant-induced psychosis and battling over the custody of his child, Carl. His screed becomes both a blueprint for a harsh childrearing climate (mummies and daddies living apart, with the kids splitting time between them) and a full-blown cosmology.

As Self moves between eras, he divides the book between Dave’s story and the story of the great Flying (slang in the future for “heresy”). The latter involves the appearance of the Geezer (prophet) on the island of Ham (Hampshire) in 508 A.D. (after the “purported discovery of the Book of Dave”), who claims to have found a second Book of Dave annulling the “tiresome strictures” of the first. He is imprisoned by the PCO and mangled beyond recognition, but, 14 years later, his son, Carl Davish, travels from Ham to New London, determined to create a less cruel world that responds to the “mummyself” within. Self’s invention of a future language (including dialect Mokni, which combines cabby slang, cockney and the Esperanto of graffiti – and, yes, a dictionary is provided) is wickedly brilliant, with surprising moments of childlike purity punctuating the lexicon’s crude surface (a “fuckoffgaff” is a “lawyerly place,” while “wooly” means sheep). Self is endlessly talented, and in crossbreeding a fantasy novel with a scorching satire of contemporary mores, he’s created a beautiful monster of the future that feeds on the neurotic present – and its parents.

From Booklist
[Starred Review] This searing satire maps the unraveling of London cabbie Dave Rudman’s life – and the resulting Book of Dave he prints on metal pages and buries in his former backyard after his ex-wife cuts off visitations with his son. Meanwhile, sometime in the twenty-sixth century or beyond (dating of the period is pegged to “the purported discovery of The Book of Dave”), England has entered a second Dark Age; the country, now called Ing, is broken apart by rising seas and spiritually bankrupted by the twisted teachings of Dave, which mix mad misogynistic dictates with the legendary knowledge of London streets (“the runs and the points”) that the city’s cabdrivers must internalize. On the former heights of Hampstead, now known as the isle of Ham, villagers live side by side with the gentle motos – walrus-like creatures who talk like lisping human children, products of twenty-first-century genetic engineering.

As present-day Rudman slowly reclaims his life, the future sons of Ham seek out Dave’s rumored second book – the one recanting his earlier ravings and giving mummies and daddies permission to love each other again. But as Dave’s ex prophetically muses, “everyday life was made up of a series of small botched actions, which, although instantly forgotten, nonetheless ruined everything.” This is as rousing an indictment of organized religion – and especially fundamentalism – as readers are likely to encounter in the post-9/11 canon. (Frank Sennett)